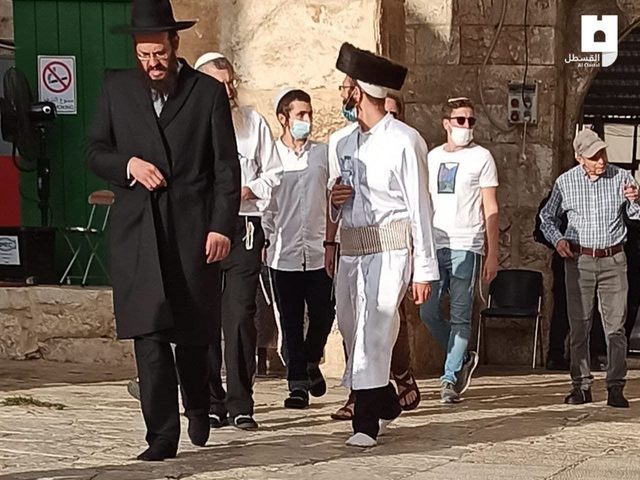 An-Najah News -  Today, Thursday, hundreds of settlers stormed the courtyards of the Al-Aqsa Mosque, while the occupation forces arrested a woman and a young man from its courtyards.

According to one of the Al-Aqsa guards, hundreds of settlers stormed the place in large and massive groups, performed Talmudic rituals, and gave explanations about the alleged temple, amid strict protection from the occupation police.

The occupation police summoned Ahmed Al-Dalal, one of Al-Aqsa guards, for interrogation at Al-Qashla Center.

In the same context, the occupation forces arrested Mrs. Raeda Saeed and the young man Saif Al-Qawasmi, while they were in the courtyards of the Al-Aqsa Mosque, and took them to Al-Silsa Gate, one of the gates of Al-Aqsa.

It is noteworthy that the settlers intensified their daily incursions into Al-Aqsa; under the pretext of Jewish holidays, the "alleged temple" groups call for extremist settlers to storm it.