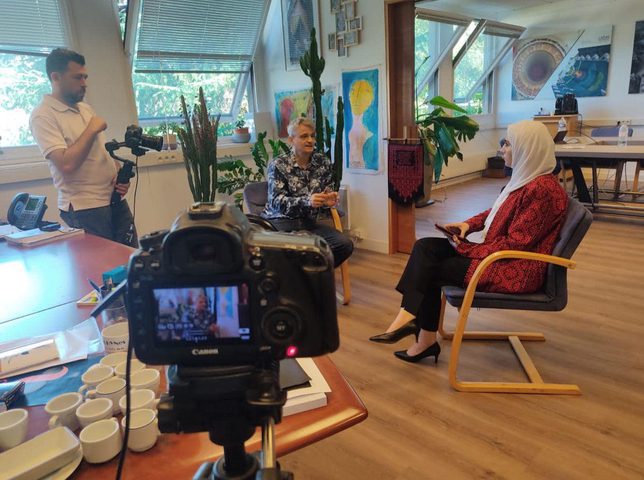 The visit began with Dr. Ahmed Bassalat, Assistant Professor in the Department of Physics at the University, visiting researcher at IJCLab, and the head of the winter school in High Energy of Physics in Palestine (WISHEPP). WISHEPP was the project that Bassalat created and launched in 2016, which in its turn lead to the ongoing strong relationship between the two universities. It has been organized annually since its launched at An-Najah University. WISHEPP includes series of lectures, short seminars, specialized and hands-on sessions presented by several professors from Paris Saclay and other European institutions.

In an exclusive interview, Bassalat spoke about this cooperation, its inception, and about the important projects and achievements during the past seven years of working with them. He praised the excellency of An-Najah students at Paris Saclay, noting that the currently number of An-Najah students who are obtaining their degrees is 22, while the number scholarships offered to students of An-Najah has exceeded 100. He was very proud talking about An-Najah University's distinction by joining the Atlas experiment at the European Center for Nuclear Research. It is considered as one of the most important scientific experiments in the world.

The team met also Dr. Hadeel Abu Al-Rub, PERLE Project Coordinator at An-Najah University. She is an assistant professor in the Department of Physics and currently a visiting researcher at the University of Paris Saclay and responsible for the Pearl project at An-Najah University who spoke about her travel, study experience, and the challenges she faced until she reached the achievements she has today. Her recent achievement is leading An-Najah to be part of PERLE collaboration, which is an international scientific cooperation that includes prestigious scientific laboratories from France, England, and the United States. The agreement was signed in the 2nd of July, 2022. Hadeel said that she is working hard to provide the necessary support and assistance to students from An-Najah  who are  currently in Paris-Saclay and just started their academic path. Hadeel went through the same experience, circumstances, and is fully aware of the difficulties and obstacles they may face.

On the second day of the visit, The Head of Accelerators Unit at IJCLab, Sebastien Busson took the Media Center staff on a tour of one of IJCLab facility called SUPRATech, which was built in 2005. for the reason of design, build and assemble accelerators of various forms. He explained in details about this facility, its divisions, the functions and the purposes. At the end of the tour, the media center staff got the chance to interview Busson who expressed his great admiration for An-Najah students, their academic distinction, and their passion for learning and researching.

The media center staff had an exclusive meeting with the Director of IJCLab and Professor of Physics at the University of Paris Saclay , Achille Stocchi, who highlighted the importance of both universities especially in the scientific fields. He praised the students of An-Najah who he encountered during the past the years. The Palestinian students impressed him with their knowledge, skills, and their eager to seek knowledge and research. He pointed out that they are going to build an accelerator to using energy recovery LINAC technology. At the end of the interview he said that he is looking forward to visiting An-Najah University next November. In an article that is published at Paris-Saclay university, he said that An-Najah university is very strong in the field of High Physics of Energy and that it is distinguished by its research and participation in SCERN.

The staff of the Media Center mingled with the students and learned about their academic, social and daily life. The team had the chance to meet the distinguished couple Omar Al-Najjar and Sally   Salameh, who are at their mid-twenties, to tell us about their scientific excellence at BA degrees, and about their plan and their decision to marry and travel to France to obtain their high studies and the challenges they have faced, especially with their newborn child and how they share the responsibilities equally. These obstacles didn’t stop them from achieving their goals, where Sally second rank on the University of Paris-Saclay with her academic achievement. They ended the interview with a message to the youth back home to Palestine to study and obtain high degrees. Additionally, they said they will go back home to transfer the experience and knowledge to their people and hope to teach and be part of An-Najah University academic staff.