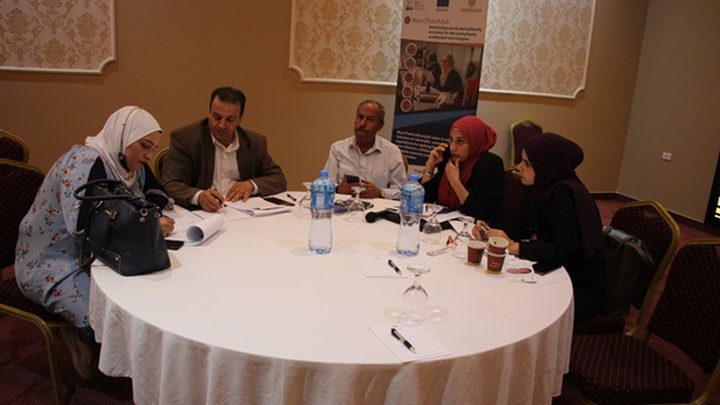 The workshop was opened by a welcoming speech by Mr. Alessandro Zedda, representative of the Joint Technical Secretariat (JTS) of ENI CBC MED Programme, who emphasized the importance of the project in the development of policy briefs and suggestions which will improve the planning of policies adapted to the needs of the target groups.

It brought together representatives from different ministries and institutions, including the Ministry of Social Development, the Ministry of Labor, the Ministry of National Economy, the Palestinian Fund for Employment and Social Protection for Workers (PFESP), the Cooperative Work Authority, the Economic Empowerment Foundation, the Palestinian General Federation of Trade Unions, and the Federation of Palestinian Chambers of Commerce, as well as practitioners, policy-makers and other stakeholders concerned with the Social and Solidarity Economy (SSE) in Palestine and a group of representatives from the public administration.

The main objective was to study the employment policies in Palestine and the role of SSE actors in the development and enhancement of these policies to foster job creation among the marginalized groups in Palestine.

Additionally, it aimed to enhance the understanding of practitioners, policy-makers and other stakeholders on the SSE in Palestine to contribute to its development in Palestine.

Dr. Imad Brik, EU-projects' coordinator pointed out that MoreThanAJob has launched a call for proposals which targets SSE actors in cooperation with public institutions to develop and submit project proposals with the aim of creating new job opportunities for the marginalized groups in Palestine. The submitted proposals will be evaluated locally and regionally by external evaluators to select the best two projects in creating new employment opportunities for vulnerable, and unemployed people ‎in Palestine.

The participants discussed the lack of employment in Palestine which is one of the main causes of social instability and highlighted the importance of addressing this problem.

Through this workshop, the participants were equipped with common understanding on values and contributions of SSE to promote job creation in Palestine. This understanding ultimately resulted in forming better SSE policies tailored to the national context.

It promoted dialogue among the participants and key SSE stakeholders and increased their capacity in developing and strengthening SSE policies as they discussed the impacts of the SSE actors on job creation.

As part of this workshop, participants engaged in an exercise to develop a concrete action plans on SSE tailored to their specific context. At the end of the workshop, the participants gathered to identify successful methods and strategies to improve employment policies in Palestine and prepare the labor force considering the development needs and productive sector demands. The workshop resulted in a number of recommendations, the most important ones are facilitating access to skills training on enterprise development, empowering vulnerable groups to start or improve their businesses through the new skills acquired, and establish a community of practice network for information and knowledge exchange among institutions working on entrepreneurship, and income generation.