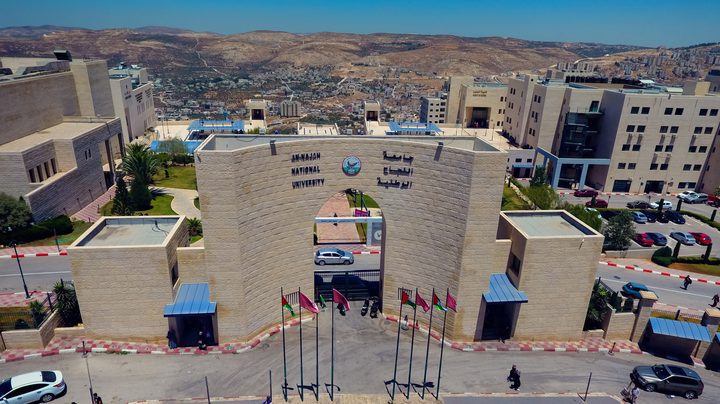 An-Najah News - An-Najah National University has made a new progress and achievement in Times Higher Education Impact Ranking in 2021, and it has been ranked the 1st Palestinian university, the 9th in the Arab World, and among the best 200-300 universities worldwide.

The universities are ranked based on 17 areas that represent the sustainable development goals made by the UN’s SDGs in 2015, and measure the extend of universities’ commitment to achieve these goals.

The 17 SDGs are considered integrated based on the belief that work in one area will affect results in other areas, and the development should balance social, economic, environmental sustainability.

The participation in this ranking requires universities to participate in at least 4 goals of the SDGs, in which the 17th goal is chosen as a mandatory goal, and then 3 goals are chosen with the best score.

The University’s performance was distinguished according to the categorization in different aspects, of which good teaching, eliminating hunger, reducing inequalities.

Globally, An-Najah National University ranks 22 in achieving the goal of good education, as it makes sure to provide its students with high- quality academic programs, promote discussions among cultures and the scientific research. Also, one of its most important goals is to offer the students and the teachers the best teaching environment, and the University allows the local community to access the educational resources through the E- learning center and libraries.

An-Najah National University ranks 87 globally, in achieving the goal of eliminating the hunger, as the University works professionally on achieving this goal through the Community Service Center the University has and through field work with different groups in the Palestinian community, as well as, it works on supporting the families and individuals  who  live in poverty by  monthly assisting hundreds of such cases and meeting up all their needs, including, clothes, food, furniture, medicine, school supplies and health and medical supplies.

Also, this center works to rehabilitate the dwellings of those families, and support them through several programs, of which the harmless loan that enables the families to start up a small self – reliance project.

The university also ranked 93 worldwide in the goal of (reducing inequalities). An-Najah University is committed to equality, justice, integrity, freedom, and standing against harassment and discrimination, and wage equality, and it has a series of policies that address these rights and impose severe punishments for violation and abuse of these rights.

An-Najah University gives justice and equality to all those who apply to study in it, especially students from low-income families, and provides educational awareness about education and equal opportunities and encourages marginalized groups to complete education through events, workshops, lectures, school visits and volunteer work.

Universities around the world are striving for the Times Rankings for Societal Impact which is one of the annual publications of the British Times Foundation that compare the performance of universities worldwide, and it is one of the most important global rankings that are credible, reliable and highly transparent.

He pointed out that An-Najah University is always striving to move forward to reach universality by improving the quality of its educational, research and service outputs, due to its significant impact on its academic reputation.

He emphasized that this achievement is nothing but the result of concerted collective efforts that all university employees, including academics and administrators, as well as students contribute to, as the university has carried out many various activities in the field of sustainable development in an effort to advance the university's classification file at the international level.